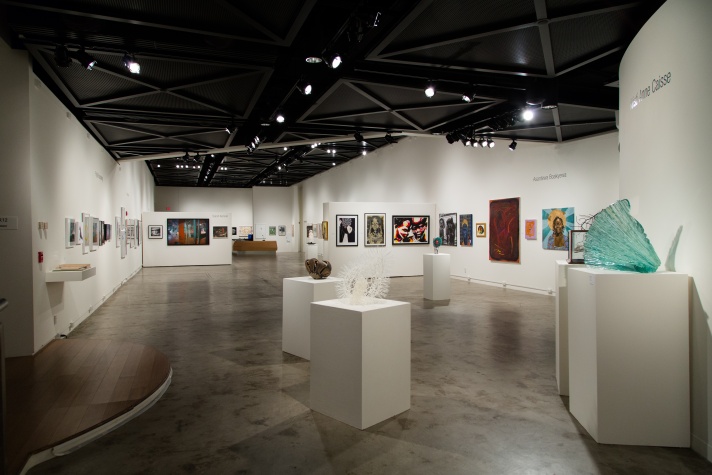 The Washington Project for the Arts’ annual auction show is not a comprehensive overview of the D.C. art scene, but it usually includes a fair number of highlights from recent exhibitions. So it is this year with “Select 2015,” at Artisphere until the auction and gala March 7. There’s one of Jason Gubbiotti’s hard-edged abstractions, as seen at Civilian Art Projects; a black metal weed by sculptor Dalya Luttwak, recalling her show at Greater Reston Arts Center; and a garishly gorgeous Bangkok phone booth, from the series that photographer Frank Hallam Day exhibited at Addison/Ripley.

Most of the artists are local or locally rooted, but finding anything else that links them is a challenge. Some pieces are as inside-the-Beltway as New York artist A.J. Bocchino’s “Washington Post (State of the Union),” which collages headlines of presidential pronouncements all the way back to Rutherford B. Hayes. Others clearly depict someplace else, such as the sign outlined against a granulated L.A. sky in local photographer Cynthia Connolly’s picture.

Photography is well represented with images such as Kwame Shaka Opare’s ironically titled “Black Faces,” in which several figures conceal themselves from the camera so that the only visible visage is a picture on the back of a sweatshirt. The sculpture tends toward modest materials, such as the white plastic fasteners that Sui Park assembled into the spiny “Wiggling” or the cardboard boxes employed by Nara Park and R.L. Tillman. The latter’s “Aphorisms” offers tips that have nothing to do with the sometimes arcane concerns of contemporary art: “Call your mother,” recommends one, while another instructs, “Lose some weight . . . just 5-10 lbs.”

Press
Washington Project for the Arts