A Special Offer for Friends and Patrons of WPA 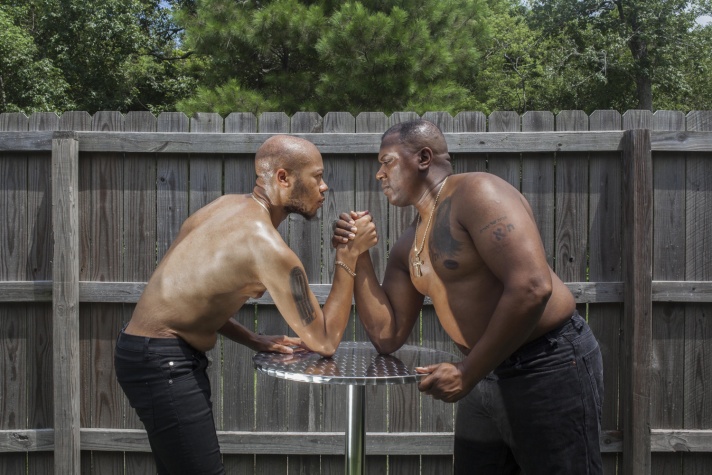 WPA is excited to announce the release of a new photographic print by D'Angelo Lovell Williams to benefit its programs. Williams, one of New York's quickly rising emerging artists, exhibited this summer at WPA in There Are No Shadows Here: The Perfect Moment at 30, a project curated by the artist Tiona Nekkia McClodden, recent winner of the 2019 Bucksbaum Award from the Whitney Museum of American Art. Williams is giving WPA patrons this opportunity as a thank you, and to provide support for artists, through WPA, working in the DC area.

The sale price is $1,800. Proceeds will benefit WPA's artist-driven programs and the artist. To purchase the photograph, please contact Peter Nesbett, WPA's Keeper of Imaginative Futures, at 202.631.5438 (cell) or pnesbett@wpadc.org.

D'Angelo Lovell Williams (b. 1992) had his first solo exhibition in New York at Higher Pictures in 2017 while still in graduate school. Roberta Smith of The New York Times described it as "one of the year's best gallery debuts." The New Yorker magazine weighed in that, "The young photographer's intimate, improvised surrealism makes for images as jarring as they are elegant." W magazine touted him as of one of "the 10 young photographers to follow in 2018."

Today, Williams' work is in the collections of the Art Institute of Chicago, Studio Museum in Harlem, Tate Modern, and other museums. It was also recently featured in a special issue of The New York Times Magazine. He has had solo exhibitions at Higher Pictures (2017, 2018, and 2019); Spark Contemporary Art Space, Syracuse (2016); and Beauty Kings (2015), and SALTQuarters Gallery, Syracuse. His work was also on view in Colour Somewhere, Lipscomb University, Nashville (2019); Gendered, The Mint Museum, Charlotte (2017); and Queering Space, Yale University Art Gallery, New Haven (2016). He is a graduate of Skowhegan School of Painting and Sculpture and a recipient of the En Foco Photography Fellowship. He earned his BFA from Memphis College of Art in 2015 and his MFA from Syracuse University in 2018. He lives and works in Brooklyn.

Daddy Issues (2019) depicts a stand-off between a father and son, pitting different notions of sexuality, masculinity, and even morality against each other. The two shirtless, Black men are preparing to arm wrestle on a metal table in what appears to be a suburban backyard. Their eyes are locked in challenge. The smaller of the two men is the artist, who bears a tattoo of a slave ship diagram on his bicep. The larger figure is his father; a gold cross hangs from his neck, illuminated by a beam of sunlight. Neither man's body is hyper-fit, and the familial competition is clearly one neither has physically trained for. Knowing that the artist is queer, a fact expressed in his other work, lends the stand-off an added layer of meaning.

Williams has said of his decision to use his body in his photographs, "I took matters into my own hands to break the streak of art made depicting thin, white bodies, as well as hyper-masculine bodies of color." (Out magazine, 2017).

D'Angelo Lovell Williams' work was first introduced to DC audiences in There Are No Shadows Here: The Perfect Moment at 30, a multi-part project curated by Tiona Nekkia McClodden at Washington Project for the Arts (WPA) from July 18 to August 17, 2019. Featuring the work of D'Angelo Lovell Williams and George Dureau, ­with presentations by Alex Fialho, Oluremi C Onabanjo, Mia Kang, and Tiona Nekkia McClodden, the project aimed to provoke new conversations around those aspects of Robert Mapplethorpe's life and practice that have been pushed to the periphery by recent institutional legacy-building activities. It was presented on the 30th anniversary of WPA's exhibition of Mapplethorpe's The Perfect Moment.

There Are No Shadows Here is one of WPA's artist-driven projects. Recognizing that artists are increasingly collaborating across boundaries and borders to build community and shape discourse, WPA adopted an artist-driven mission in June 2018. Artists now set the agenda for WPA's programs by curating or organizing projects that are responsive to their interests and pursuits.