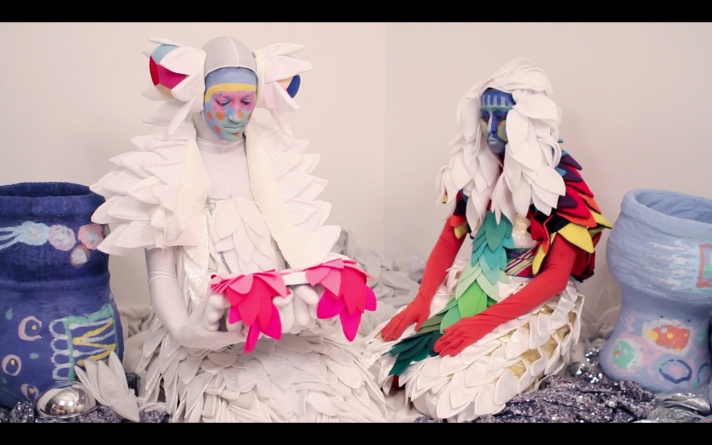 Saya Woolfalk is a New York-based artist who uses science fiction and fantasy to explore issues of race, sexuality, hybridization, connection, and creativity to re-imagine the world in multiple dimensions.  Her dynamic, multi-media works combine anthropological research with folklore and mythology along with colorful, bizarre costumes to blend fantasy and reality in imagining a future utopia that is both beautiful and disorienting.

Woolfalk’s father is African American and white, and her mother is Japanese.  Herself a “hybrid,” Woolfalk has allowed her personal experience of hybridization to consider larger issues of race, gender, power, and the environment and how cultural, racial, ethnic, and also technological hybridity are becoming ever more present and challenging in our contemporary, globalized society.  It is this confluence and conflict of cultures that continue to shape her interest in behavioral patterns in relation to social structures could potentially be addressed through art projects.

Woolfalk attended graduate school at Brown University and shortly after received a Fulbright to study cultural, craft, performance, and folkloric traditions in Brazil.  Drawing from her research into cultural patterns and traditions, Woolfalk has built an extensive body of work envisioning a fictional future utopia challenging us to consider and re-consider the possibilities of what it means to be human and our co-existance and interactions with other life forms.

In its latest Hothouse Video exhibition, Washington Project for the Arts (WPA), is presenting a selection of Woolfalk’s videos from the last 10 years of her practice including Winter Garden Hybrid Love Objects, Ethnography of No Place, and selections from her most recent video series, The Empathics and ChimaTEK. Each video, provides a time-based experience, like reading a chapter in a novel,  providing small fragments of a larger story. Through a process of gradual exposure, Woolfalk’s videos encourage an consideration of the present, and to paint a vision of the future.

A seminal video produced in 2005, Winter Garden Love Objects presents an early glimpse of Woolfalk’s unfolding and developing process of incorporating her ethnographic approach to art making.  It was produced during Woolfalk’s Fulbright scholarship in Brazil and was commissioned by PS1/MoMA.

Working with anthropologist Rachel Lears to both imagine, document, and position a fictional future utopian world, Ethnography of No Place offers a vision where plant and humans change gender and color, and transform into the landscape when they die.

The Empathics, produced in 2013, begins to broaden Woolfalk’s vision as she considers how people of the present may attempt to understand each other and their ability to become people of this future utopia.  Her “Empathics” are a group of women who physically and culturally metamorphose as they merge identities and cross species as a means to negotiate their hybridized contemporary reality.  The Empathics have produced their culture by incorporating and blending culturally and biologically into their surroundings which manifests through physical mutations such as growing a second head.

In Woolfalk’s Utopia Conjuring Chamber, the Empathics guide each other through rituals to promote continued metamorphose through lucid dream explorations.

Chimera refers to the concept of hybridization, describing the confluence of disparate elements present in a single organism.  Woolfalk’s video Chimera further investigates the hybridity and the Empathics’ fusion of various cultural identities as manifest through the animal and plant characteristics they exhibit.

ChimaTEK, Woolfalk’s most recent project, is a video for an empathic corporation—as dreamed by Woolfalk—designed to sell products that give users access to a chimeric existence through the creation of personalized virtual avatars. ChimaTEK seeks to offer people of the present a main-stream, distributable path towards incorporation into the fictional future utopia.

Woolfalk’s vision of a possible future manifests videos that are playful and visually pleasurable.  Discrete elements of a much more complex, generative, large-scale visual and narrative project, her videos provide questioning notions of utopia and dystopia, empathy and cooperation, and challenge us to consider our current cultural positioning and the possibilities the future.