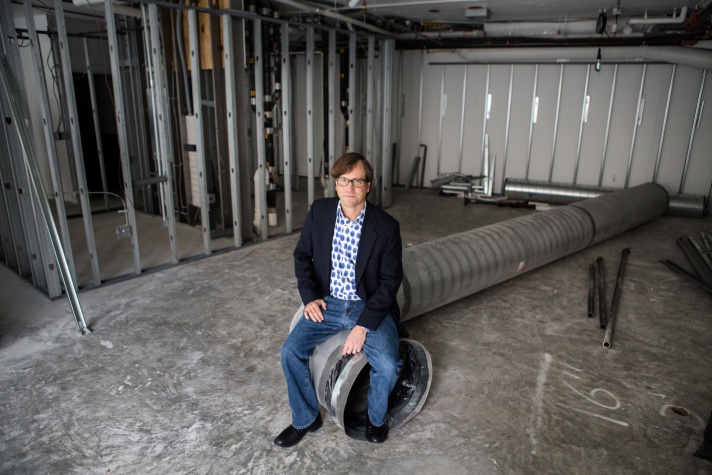 Washington Project for the Arts (WPA) is pleased to announce the appointment of Peter Nesbett as its new Executive Director and the opening of Washington Produced Artists on November 14, 2015.

The announcement comes on the eve of the organization’s 40-year anniversary and upcoming move to The JBG Companies’ Atlantic Plumbing development at 8th and V street NW, in the U Street Corridor and cultural district.

Mr. Nesbett’s proven leadership and more than 20 years of experience with contemporary arts will further solidify WPA’s place in the local, national, and international artistic community.

Upon taking office in early November, Mr. Nesbett will enjoy a full immersion into the DC arts community by meeting with more than 100 artists in his first 100 days as Executive Director.

Prior to WPA, Mr. Nesbett was the Associate Director for Programs at The Pew Center for Arts & Culture, a subsidiary of The Pew Charitable Trusts in Philadelphia. He oversaw the capacitybuilding and professional development programs, while serving as the visual arts specialist. Mr. Nesbett’s interest in programming for artists and arts professionals was originally seeded in the 1990s when he led the Seattle Art Museum’s Contemporary Art Council and worked in its education department.

“Peter is the complete package. He’s well educated, has deep curatorial experience, and he really ‘gets’ the contemporary and alternative visual arts scenes,” says WPA Board of Directors member, Elise Hoffmann. “His compelling vision and commitment to centering WPA within the local arts community is just what we need right now.”

WPA will also celebrate its 40-year anniversary and move to the U Street Corridor with the opening of a new exhibit, Washington Produced Artists, curated by Laura Roulet. The inaugural exhibition in the new space will serve as a proud recognition of local artists who created significant works in conjunction with WPA early in their careers and who have since built esteemed reputations.

William Christenberry showed photography, sculpture and even neon with WPA throughout the 1980s as well as serving on the Board of Directors from 1980-1986. The image of the District presented in his rarely exhibited, photographic series of Washington storefronts from 1970-72 stands in stark contrast to today’s cityscape. Most of the facades he captured with a Brownie camera are long gone, but for both new and old residents, they recover a historic authenticity.

Jim Sanborn constructed massive outdoor installations for the WPA’s “Washington Art Site” projects from 1980-1983. In this exhibition, he presents an installation from “Without Provenance: the Making of Contemporary Antiquity,” a provocative new series of sculptures and text exploring the widespread looting and forgery in Khmer antiquities, permitted by the collusion of the marketplace.

Joyce J. Scott, a lifelong Baltimorean, exhibited at the WPA in the early 1980s, and was included in the important exhibition “Alternatives by Black Artists” (1980) curated by Keith Morrison. Widely recognized for her exquisite craftsmanship and bold themes addressing race and gender, WPA will show several examples of her beaded and glass works incorporating African sculpture.

Dan Steinhilber, was sponsored by the WPA in a 2010 residency at Socrates Sculpture Park in Long Island City, New York. Known for unexpected uses of unconventional materials, he will create a new work channeling brightly colored liquids in a liquid landscape, reminiscent of the Washington Color School paintings.

The ever-changing, ever-engaging Workingman Collective first disrupted the District space in 1983 in the form of a collective called “Dog Dream Project.” With the participatory, parade-like mapping project, “Twine,” the working men and women will revisit all former WPA homes in chronological order, accompanied by drummers and anyone else eager to revisit the past and purposely walk into the present.

Michelle Lisa Herman will exhibit a newly commissioned version of her 2014 installation, Mirror Mirror, which will feature WPA artists and curators spanning the forty-year history of the organization. Herman is an interdisciplinary WPA member artist who lives and works in Washington, DC. She graduated from the Maryland Institute College of Art in 2008 with a BFA in general fine art and art history.

Maida Withers participated in the inaugural exhibition of the WPA in April 1975. She served on the Board of Directors for many years, and remains a revered institution in the Washington dance and performance community. Her Dance Construction Company will perform live interactions, blurring the lines between the real and the virtual with costumes designed by Amelia Zhang and Brian Kane, to celebrate the WPA November opening.

Laura Roulet is an independent curator and writer, specializing in contemporary and Latin American art. She was one of five international curators chosen for the citywide public art project, 5 x 5, a major initiative sponsored by the D.C. Commission on the Arts and Humanities in 2012. She has organized exhibitions in Mexico, Puerto Rico and the U.S. including at the Art Museum of the Americas, the Mexican Cultural Institute, Artisphere, Hillyer Art Space, Project 4, Fusebox and the DC Art Center. Recent exhibits include the National Drawing Invitational (Arkansas Arts Center, Little Rock, AR), CSA: 40 Years of Community-Sourced Art (Arlington Arts Center, VA), Frances Gallardo: Meteorology (Target Gallery), Sculpting Outside the Lines, an outdoor sculpture exhibit in Foggy Bottom and Medios y ambientes in Mexico City. She is currently the mentoring curator for VisArts in Rockville, MD and is organizing Come Back to Rockville!, a participatory, public art.

About Washington Project for the Arts

Since 1975, WPA has nurtured artists in the Washington D.C. region and commissioned, exhibited, and interpreted their work. The move to the Atlantic Plumbing Building at 2124 8th Street marks WPA’s seventh home base as the organization continues to deliver the engaging and innovative environment needed to produce art.

Washington Project for the Arts is a non-profit organization whose mission is to serve as a catalyst for contemporary art. WPA supports artists at all stages of their career and promotes contemporary art by presenting exhibitions, issues, and ideas that stimulate public dialogue on art and culture. Since its founding in 1975, WPA has showcased the works of thousands of artists and has reached hundreds of thousands of visitors and viewers with its programs and projects.

Washington Project For the Arts Inc. is supported by the City Fund, which works to make the District of Columbia a more healthy, stable, and vibrant place to live for all its residents. The City Fund is administered by The Community Foundation for the National Capital Region.