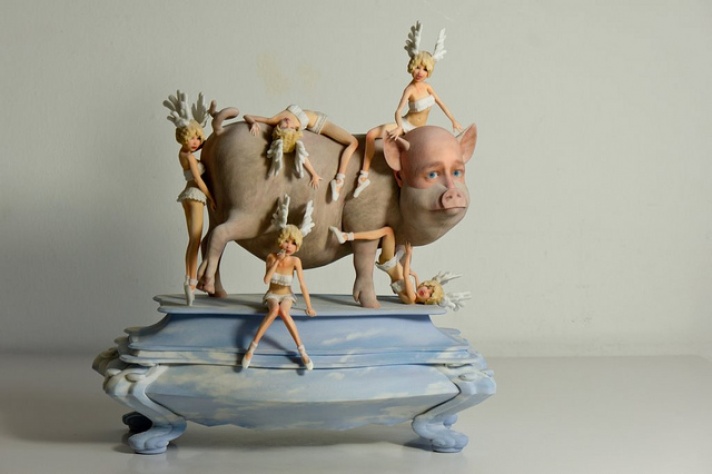 This week, WPA spoke with artist Jonathan Monaghan and writer Gareth Branwyn on 3D printing technologies and their implications for artists.

WPA: Thanks for talking with us. Let’s start off with the basics: what is 3D printing?

Gareth Branwyn: 3D printing is a process for rendering a three-dimension digital object into a three-dimensional physical one. The most popular consumer-grade form of 3D printing involves the use of a printer not unlike a conventional desktop computer printer, but instead of the print head going back and forth and depositing ink onto paper, the head goes side to side and front to back, and the print bed moves up and down. This way, the print head (called an extruder) can deposit molten plastic onto the print bed, and based on the instructions from the computer, build a three-dimensional object. Most of today's extrusion printers are basically glorified, computer-controlled glue guns. But the resolution, while not high, is good enough to create some fairly sophisticated, intricate objects.

Jonathan Monaghan: Yes, 3D printing is a process where physical forms are built layer-by-layer from computer designs. I see Rapid-Protoyping as almost the same thing, although that word is not usually associated with the consumer-level.

Branwyn: 3D printing is a form of rapid prototyping (or the ability to quickly create scale models or test parts of desired designs), but it is not the only form (nor is 3D printing only for prototyping). It is probably the most common form, but there are other rapid prototyping techniques, including CNC (Computer Numerically-Controlled) routers, laser cutters, and various forms of mold-making and vacuum forming. Other emerging so-called "maker technologies," such as the microcontroller Arduino and the computer on a chip, Raspberry Pi, can also be considered rapid prototyping tools because they allow one to quickly create and test physical computing applications (which allow interactions and feedback between digital and physical worlds). What's especially exciting is that all of these technologies are starting to become accessible to small groups and individuals who don't have lots of money. 3D printing allows you to iterate your ideas very quickly and it allows you to create custom-made objects for a wide range of applications.

WPA: When did this technology start to cross over into becoming more mainstream? Who has helped this happen?

Monaghan: A couple years ago this technology was adopted by hackers, hobbyists and do-it-yourselfers who would try to build basic 3D printers by sourcing off the shelf parts. It was very exciting as all of a sudden very expensive processes were becoming cheaper than a laptop. Software has followed suit and it has become easier to make things virtually.

Branwyn: The idea was to create an affordable desktop 3D printer and to make the development of the project "open source," with all design and program files available to all and the group sharing of any design innovations. A global community of "hardware hackers" embraced the project and began building printers and sharing the results online. The next big leap came in 2009, when former MAKE magazine contributor Bre Pettis (along with Zach Smith and Adam Mayer) released the MakerBot Cupcake CNC. The idea was to combine developments in RepRap printing, CNC milling (for the printer's case), and the Arduino (for the control computer) and to build an open source community around the MakerBot to accelerate its development. Both RepRap and MakerBot printers were enthusiastically adopted by the growing "maker movement" and the global hardware hacking community. This has led to a profusion of small 3D printer companies. As the Editorial Directory of MAKE magazine, I spearheaded the research and publishing of the "Ultimate Guide to 3D Printing" in 2012. We were amazed at how many printers that are that are now available. We quickly filled up a test lab with 15 of them, and there were many others we didn't test.

WPA: What applications does the technology currently have? Where is it currently being used?

Monaghan: On the higher-end level it has been used in a wide variety of industries, scales and applications. On the consumer level, people have been using it simply as a tool to help them make things that are important and interesting to them.

Branwyn: While this technology has come a long way since 2005, it's still very much for tinkerer-pioneers and early adopters. The consumer-targeted printers are still fairly "low-res," with the resulting prints having visible layers and a somewhat rough texture. And, altho great strides have been made in the last few years at making these devices as usable "out of the box"  as possible, they are still largely temperamental and require a certain level of technical aptitude. During MAKE’s testing, we found that documentation and software are still rather poor and lag behind the hardware. Applications for this tech are still mainly in the realms of rapid prototyping, scale modeling (e.g. for architecture), and novelty (toys for the kids, holiday ornaments, "monitor pets" for your desk, fun because-we-can chotskies). The website Thingiverse is a growing user-submitted library of 3D-printable design files. Browsing there will give you a good idea of what people are currently designing and printing.

WPA: Why is democratizing this medium a valuable thing? Why are people working so hard to bring it to a wider group of people?

Branwyn: The future implications of this technology are profound. Imagine a world were you don't have to buy physical things and have them shipped across the country (or across the globe). You simple download a file (whether you bought it, created it yourself, or got it from a free online library) and print out toys for your kids, replacement parts for things around the house, and even complete products. There are people currently experimenting with printing out working engines, 3D-printed electronics, even 3D-printed houses, boats, and cars. And then, of course, there are the amazing things being done in the medical field with 3D-printed organs. While a lot of this may be far off in the future, we are headed to that future much faster, thanks to amateurs and weekend hardware hackers who are helping to accelerate the development of these technologies through the open source ethos, online sharing, and through face-to-face meetups are places like Maker Faires and local hackerspaces.

Monaghan: It allows you to make something only you the creator would be interested in using. Design since the Bauhaus was all about how can you make whatever it is you need to make, a chair lets say, universal, make something that works for as many people as possible and that can be mass produced efficiently and can be shipped anywhere in the world easily and quickly. Perhaps traditional criteria for good design, such as universality, can become irrelevant.

WPA: How might (or has) this technology be applied to fine art? Why should artists be interested?

Branwyn: A growing number of artists are starting to use 3D printing in their work, especially as the technology becomes easier and more accessible. Artists like Markus Kayser, with his Solar Sinter Project, have raised the public's awareness of 3D printing. Kayser set up a solar-powered 3D printer in the Sahara desert and used the sand as the print media to 3D-print glass objects. The project was designed to raise questions about the future of manufacturing (many are calling 3D printing the next industrial revolution) and the production potential of this new technology. Digital artist Greg Petchkovsky has taken to the streets with his 3D graffiti where he amends the physical world with digitally-design, 3D-printed objects that make broken stone steps look like they've been repaired with LEGOs and brick walls look like they're melting. UK artist Rachel Harding, whose work explores the intersection of "technological possibility and societal ruin," has taken to using 3D printing to extrude lace into rather ominous castle-like structures, while Eric Van Straaten has turned exclusively to 3D printing as the medium for his hyper-surreal figurative sculptures.

WPA: As an artist, Jonathan, what have some of your experiences been with the medium? How have you used it?

WPA: What are some of the best Local, Washington area resources for artists interested in learning more or making projects with the technology?

Mongahan: HacDC  is a hacker space with members who work with 3d printing. Also check out Fab Lab DC.  I am organizing a symposium on 3D printing technologies and education at Prince George's Community College on June 5th, which will be a fantastic resource!

Branwyn: NovaLabs, Baltimore Hackerspace, and Baltimore Node are our "BalWash" hackerspaces. They all have 3D printers and are happy to help people learn about this technology and to help overcome any technical issues you might encounter as a newbie. Connect with the one closest to you and see what classes they have available, opportunities for using their printers, and other ways of getting involved. These groups are welcoming, but make sure you try and give back as you take. They can also teach you Arduino, Raspberry Pi, CNC, and other maker technologies that can be used in high-tech art, interactive installations, and other innovative artwork. Fab Lab DC is a great local resource. Part of MIT's Fab Labs network, Fab Lab DC offers workshops and events on 3D printing, personal fabrication, digital design, and more. And don't think that just because you don't have a 3D printer that you can't incorporate this technology into your work. Commercial services like shapeways.com allow you to upload your 3D design files, choose the media you want to use (besides plastic, you can get prints in metal and glass), and the resulting prints are mailed to you. They even have a store where you can sell the objects you design to others. Finally, if you're interested in getting up to speed quickly, I selfishly recommend the "Make: Ultimate Guide to 3D Printing". It has tested reviews of 15 top printers as well as articles on how to get started in 3D design and printing.

WPA: Thanks for talking with us and sharing such great information!

Gareth Branwyn is a DC-area writer who covers technology, art, and culture. He was a contributing editor at Wired for 12 years and worked at MAKE magazine for the past eight years. He just stepped down from his role as MAKE's Editorial Director to work on a collection of his writing, Borg Like Me (& Other Tales of Art, Eros, and Embedded Systems), to be published later  this year. Gareth has been involved in the DC art scene since the early 90s when he started selling his art and technology zine, Going Gaga, in WPA's Bookworks store. Jonathan Monaghan is an artist based in Washington, DC currently represented by Curator's Office.