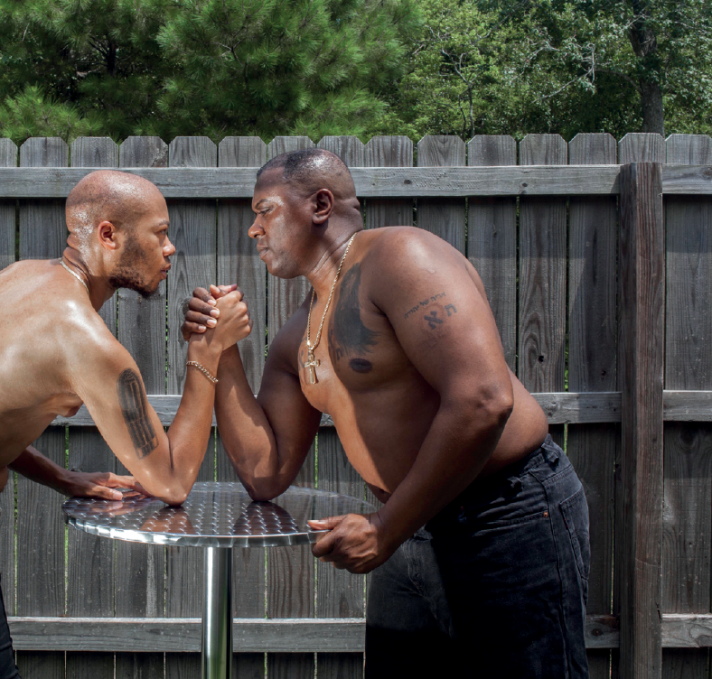 We are thrilled to announce that WPA's benefit photograph, Daddy Issues by D'Angelo Lovell Williams, is featured in the current issue of the Studio Museum in Harlem's magazine. Assistant Curator Eric Booker writes,
Williams’s new work, which the artist made during his travels through Louisiana and Wisconsin, explore the intimacy of kinship in varying forms. While visiting his father in Louisiana, the artist created Daddy Issues (2019), the first time he has photographed his father. The two are locked in an arm wrestling pose. They are shirtless; we see their tattoos, jewelry, and sweat gleam in the sunlight: symbols of masculinity, femininity, and history rendered in a state of flux.
The work conjures Lyle Ashton Harris's "The Good Life" (1994), a series of photographs that the artist made in collaboration with his given and chosen family. Three of those works—Brotherhood, Crossroads, and Etcetera #1, #2, and #3—depit Harris and his brother in various states of embrace while holding each other at gunpoint. Like Harris, Williams's work dislocates the gendered and familiar perceptions placed on him through the command of his own image. The title, Daddy Issues, adds a double entendre that furthers the ambiguity.
We still have photographs from the edition available at $1,800 each. Sales support WPA's artist-driven programs in 2020. If interested, contact Peter Nesbett, 202.631.5438 cell, or pnesbett@wpadc.org.
bridge mediaMens Nike Sneakers