Washington Project for the Arts is taking over Uline arena to show off the insane amount of talent D.C. has to offer, all while raising money to ensure that contemporary art has a place in the District. If you care about D.C.’s art scene (0r are looking to decorate a brand new apartment / up your collecting game) this is not an event to be missed. In anticipation of this sweet sweet party, we hit up some of the artists who will be in attendance to talk about the work they’ll be auctioning off, what the D.C. artist community means to them, and the best pranks they’ve ever pulled (April 1st is around the corner! We all have to be prepared).

Tickets to the gala are on sale now (and we recommend you grab them before they’re gone forever). 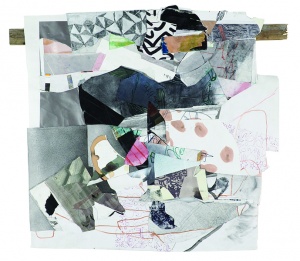 Markele Cullins: My laptop! I use it a lot for Photoshop, research, and inspiration.
Shané K. Gooding: Vision Board (and my stash of gummy bears).
Andrea Limauro: Two things: Music (Reggae or 90’s grunge music–depending on my mood) and a palette knife.
Josh Sender: My studio is my laptop, so can my most important object be the studio itself? It’s maybe even the most important object in my life – which definitely cuts two ways.
Dana Maier: I have a few pen nibs used by the great cartoonist Richard Thompson, who sadly passed away last July. I was torn between using them and creating a makeshift desk shrine for them. But I just couldn’t resist using them. Fortunately his friends told me he would’ve preferred that.
Danny Simmons: My workbench, where my oil paints, powdered pigment, brushes, and recently various fabrics are. It’s a messy place but it functions for me because after years I know where to find just what I’m looking for.
Roberto Visani: My cordless drill.  It’s the most useful tool I use in creating sculpture.
Lindsay Pichaske: A small potato-shaped piece of clay with an eyeball sculpted onto it (image attached) wrapped in string. It was a little test piece I made while in graduate school. At the time, I was trying to pare my studio practice down and was asking the question “what is the bare minimum you can have in a form to suggest the idea of sentiency or life?” This little blob was the answer! I almost threw it away, but on a whim started wrapping it in pink string instead, and found that it came to life and started looking like a small being. This process of wrapping also led to the intricate surface coverings I do today.