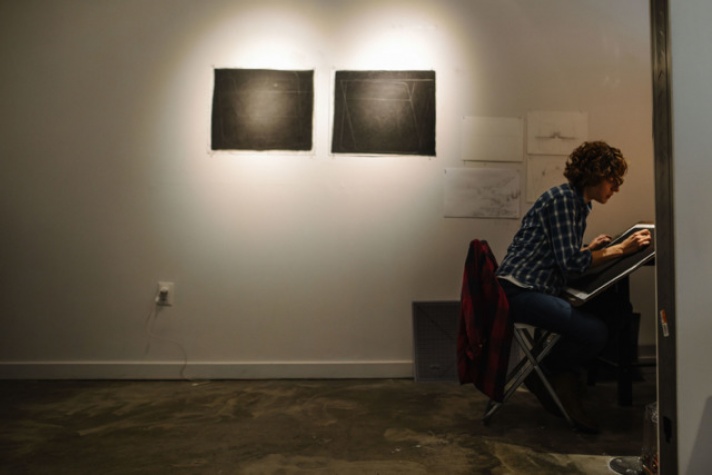 These Artists Are Staging a Radical Act of Motherhood

At the Washington Project for the Arts' "Artist Mother Studio," a reclamation of artistic prowess and motherly inclinations.

Amy Hughes Braden is staging a radical act of motherhood. That it’s taking place at an art gallery shouldn’t only be a little surprising.

For Artist Mother Studio, Braden has turned the Washington Project for the Arts into a kind of live–work nursery and studio. Every work day, she and three other artists—Katherine Mann, Leah Lewis, and Anne Smith—enjoy three hours of uninterrupted studio time, on site, while a professional caretaker looks after their children in a separate part of the gallery.

Artist Mother Studio is Braden’s answer to the isolation that parents feel, especially when their children are younger than three. The project—an exhibit under the broad and expanding umbrella of socially oriented art—is an act of resistance. Braden says she learned quickly that parts of parenthood were going to be a problem for her.

“Motherhood has been the key thing to sort of radicalize me,” says Braden, a painter and a do-it-yourself leader in the city’s art scene. “Things I already knew and believed became more critical to me.”

Over the last two months, these four mothers rediscovered their practice: picking up projects where they’d left off, launching new painting or drawing series, or simply looking and drafting. Artist Mother Studio is a defiant gesture, an effort to help these artists reclaim their time—not from their children, but from child-rearing structures that insist that mothers work without support.

Step inside the WPA’s 8th Street NW gallery space and Artist Mother Studio, which winds down this weekend, makes its terms clear. The gallery built a partition to divide the space where Dani, a professional caretaker, watches over the artists’ children during the day. Mann, Lewis, Smith, and Braden occupy the central gallery area, which they’ve turned into an incubator for their art.

“I was an artist before. I’m still an artist,” says Mann, a D.C. painter with a 2-year-old daughter and a 3-year-old son. Stealing time to finish a painting during naps or at 2 a.m. doesn’t work for her, she says, and she suffers a lingering suspicion that people have forgotten about her. “Just the fact of having 3 hours a day to focus on my practice is life changing.”

Smith, an artist with a 4-month-old daughter, said she was nervous about participating in a project that would separate her from her child for the first time (even if she was only across the gallery). However, “Artist Mother Studio” has enabled her to pursue a series of imaginary landscapes in a messy medium, charcoal, a potential contaminate that she couldn’t work with at home.

Dani Simms, a professional caregiver by trade, watches the artists’ kids paint on the gallery walls while their mothers do a more refined version of the same. She says this assignment is different from the ones she usually finds through UrbanSitter, but shared childcare is part of her wheelhouse. “I really believe in the ancient old ways of raising children with a community,” she says.

So does Braden. She is looking at changing more than the lives of the artists who were able to answer her open call (with support from the D.C. Commission on the Arts and Humanities). This is the second iteration of “Artist Mother Studio”; they launched the project through Rhizome earlier this year, after it dawned on her that she wasn’t going to be able to make work without support. The project echoes her dissatisfaction with structures for childcare “built by people who don’t understand what it means to be a caretaker.”

“Viewers to WPA during AMS aren't seeing Amy's depictions of motherhood,” says WPA executive director Peter Nesbett in an email. “They are looking through the gallery windows to find a living, breathing community of artist-mothers and their children.”

Ultimately, Braden wants to assemble a kit of sorts: a set of best practices so that other artist–mothers (or artist–caretakers) can replicate “Artist Mother Studio.” She hopes she can nevertheless carve out a more visible place for motherhood in an art world that runs on a notion of side gigs and free time.

To that end, Braden organized a conference earlier in November at Howard University featuring Mariah Anne Johnson and Tsedaye Makonnen—artists who participated in the Rhizome project—as well as China Martens, the editor of The Future Generation, a long-running zine on raising children.

Lewis, a full-time mother to her 3-year-old son, says that she can’t afford childcare. Artist Mother Studio” opened the door to her to an experience that is critical to many artists but unavailable for many mothers: a residency. “It’s just meant that I’ve had time to think but not to practice,” she says. If there’s a short-term target for Artist Mother Studio,” it’s in opening more doors to residencies for mothers.

“I had this idea of residencies as you-go-and-make-work,” Braden says. “One of the first things parents lose is the ability to stare into space.”