Other Worlds, Other Stories

Other Worlds, Other Stories features the work of ten contemporary artists from the District and elsewhere who use the trope of space exploration as though it was a funhouse mirror—casting unfamiliar reflections on American dreams of escape, conquest, and adventure.

The artworks range from traditional painted images of distant worlds; to works of historical fiction illustrated with digital photography and collage; to interactive live performances in a test kitchen for astronauts. Together, they open a conversation about the heady intermingling of fantasy, art, and science that kicked off the space race in the twentieth century and still defines the U.S. space program today.

This project and Washington Project For the Arts Inc. are supported by the City Fund, which works to make the District of Columbia a more healthy, stable, and vibrant place to live for all its residents. The City Fund is administered by The Community Foundation for the National Capital Region.

This project is also supported in part by an award from the National Endowment for the Arts.

Fort Worth, Texas-based artist Adam Fung’s representational and abstract paintings offer intuitive treatments of the sublime and the unseen, and stem from his extensive travels around Texas and New Mexico—talking to astronomers and visiting sites including observatories, Dark Sky Parks, Marfa, and Spaceport America.

Baltimore artist Felipe Goncalves creates slick, illustrational artworks that often depict detritus from American culture—from Disney, to underground comix, to pornography—floating in the void of space, waiting to be discovered and interpreted by alien explorers. For Other Worlds, Other Stories, Goncalves will create a starscape mural directly on the walls of the new WPA gallery.

Annapolis, MD-based artist Casey Johnson’s Oculus is a spectacular object out of time: the massive wooden exterior looks like a space capsule from a Jules Verne or H.G. Welles novel—yet the inside contains a shimmering LED starscape, viewable from a small peephole on the far side of the sculpture.

New York artists Heidi Neilson and Douglas Paulson run the Menu for Mars Supper Club, meeting with chefs, gardeners, scientists, culinary anthropologists, and nutritionists to learn what future Mars colonists might be able to grow, cook, and eat. Their work will be represented at WPA with food samples, test kitchen equipment, and a February performance dinner in the gallery.

In his videos, objects, and performances, multidisciplinary Chicago artist Jefferson Pinder explores Afrofuturism: the mixing of science fiction, fantasy, and Afro-centric imagery in order to interrogate the African Diaspora. Pinder will be creating a new work for the WPA show depicting the corona of a super-massive black hole.

Montreal, Canada-based artist Michael A. Robinson creates chilly, austere works that conflate cosomology with the noise and hyper-stimulation of contemporary life. Robinson’s graphic works, looking a bit like abstracted star charts or diagrams, are based on his understanding of Baudrillard’s description of the media as a “Black Hole” that absorbs all meaning.

DC area artist Steve Strawn has created a new series of photographs for WPA depicting astronauts during their downtime on a newly colonized Mars. Strawn’s astronauts are prisoners of their technology, and lead banal lives in relative isolation—having brought the boredom of traditional suburban American culture with them to the red planet.

Idaho artist Lucy West is a member of the International Association of Astronomical artists, and has created meticulously rendered painted and digitally composited works for astronauts, astronomers, and scientists. Her works have been exhibited at NASA's Launch Control Center at Kennedy Space Center, and The House of Representatives in Washington D.C.

Jeffry Cudlin was born in 1972 in Durham, North Carolina; raised in Lynchburg, Virginia; and currently lives in Washington, D.C. Cudlin works as an artist, critic, educator, and curator. Since 2011, he has served as Professor of Curatorial Studies and Practice at the Maryland Institute College of Art in Baltimore, Maryland, teaching in George Ciscle's groundbreaking Curatorial Practice MFA program. He is also a member of the Board of Trustees for The Contemporary, Baltimore’s nomadic art museum without walls. 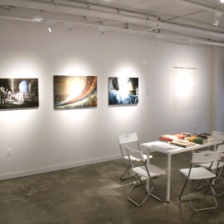 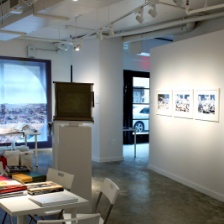 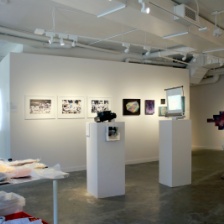 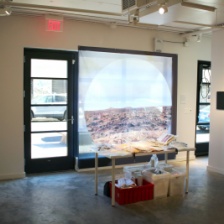