A Double Feature Screening of Films by Alisha Wormsley and Lisa E. Harris

WPA will be screening the following two films: Children of NAN: Mothership by Alisha Wormsley and Cry of the Third Eye: The Last Resort by Lisa E. Harris. Children of NAN: Mothership functions as a metaphor for the survival and power of Black women in a dystopic future. It’s important to note that the women in Wormsley’s film will be featured throughout "Black Women as/and the Living Archive" curated by Tsedaye Makonnen.

Cry of the Third Eye: The Last Resort is the third and final act of Cry of the Third Eye, a three-act performed opera film by artist Lisa E. Harris, who plays the role of NAN’s sister in Wormsley’s film. This final act by Harris considers gentrification, intergenerational legacy, loss, and the space of dreams. The completion of this meditational trilogy which spans a decade in the Historic Third Ward District of Houston, archives aspects of the artist's inner and outer environments as they change over time. Harris–the writer, director, composer, and performer–musically narrates and orchestrates the semi-silent film in this special, live presentation. 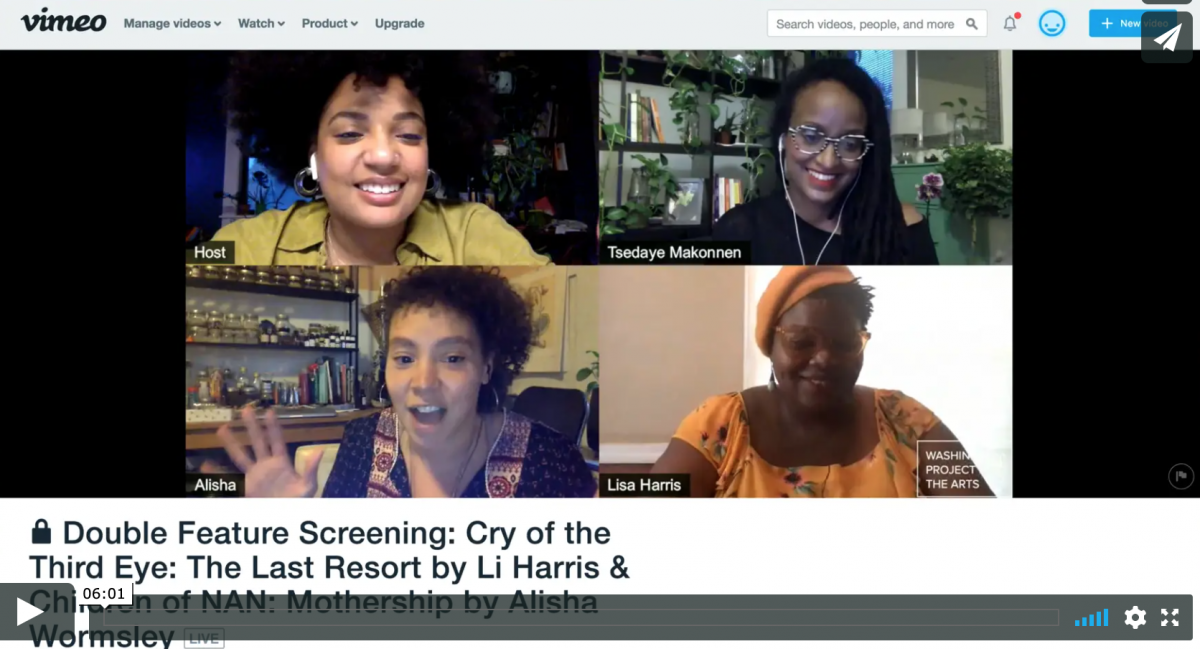 Watch the recording from this event here

Alisha B. Wormsley is an interdisciplinary artist and cultural producer. Her work is about collective memory and the synchronicity of time, specifically through the stories of women of color. Wormsley's work has been honored and supported with a number of awards and grants. Her recent projects include: The People Are The Light (part of the Hillman Photography Initiative), afronaut(a) film and performance series (Homewood Artist Residency), Children of NAN: Mothership film series and archive, and There Are Black People in the Future body of work. These projects have been exhibited at The Andy Warhol Museum, Octavia Butler conference at Spelman University, Carnegie Museum of Art, Johannesburg SA, Studio XX, Project Row Houses, Houston Art League, Rush Art Gallery, The Charles H. Wright Museum of African American History, and most recently the Mattress Factory.  She is currently working on: a public park design around community and sustainable water, a temporary installation in Pittsburgh's Market square, and creating a public program to use her text "There Are Black People In the Future" to open up discourse around displacement and gentrification. Wormsley has an MFA in Film and Video from Bard College and was awarded a Postdoctoral Research Fellowship in Art at Carnegie Mellon University.

Lisa (Li) E. Harris is an interdisciplinary artist, performer, and composer from Houston. She is a trained classical voice/opera singer and is certified as a facilitator of DEEP LISTENING, the sonic philosophies of composer Pauline Oliveros (1932-2016). Harris's work focuses on the energetic relationships between body, land, spirit, and place. She uses voice, theremin, movement, text, and new media to explore healing in performance. In 2007, Harris founded Studio Enertia, a multi-media production collective and in 2013 began the artist-run Studio Enertia Artist Residency Program in Houston. She is a 2015 Valiante Award recipient, a 2016 inaugural artist in residence at The New Quorum, and a 2017 MANCC Forward Dialogues Fellow at Florida State University, Tallahassee. Her two new opera films Cry of the Third Eye and Children of the Lost use vocal composition and film to amplify the quelled voices of youth and displaced people due to rapid gentrification in Houston's Third Ward. Harris attained a Bachelor of Music Degree from the Mannes College and a Master of Music Degree from Manhattan School of Music.

DC-based interdisciplinary artist Tsedaye Makonnen presents "Black Women as/and the Living Archive," a multi-part project aimed at initiating a conversation about the modes in which Black women encode, preserve, and share memory through community. Central to Makonnen's inquiry is Children of NAN: Mothership, a recent film by Alisha Wormsley that functions as a metaphor for the survival and power of Black women in a dystopic future. Over the course of six weeks, Makonnen will bring together Wormsley and many of the cast and collaborators of Children of NAN: Mothership for a film screening, a reading, two performances, and a discussion.

This and other WPA projects are made possible by the DC Commission on the Arts and Humanities, which receives support from the National Endowment for the Arts; The Andy Warhol Foundation for the Visual Arts; Bloomberg Philanthropies; The Corcoran Women's Committee; The Morris & Gwendolyn Cafritz Foundation; Hickok Cole Architects; White&Case; and many other generous foundations, corporations, and individuals.

Reading on Wednesday, May 27 at noon