On Monstrosity and Re-figuration: a lecture and performance by Morehshin Allahyari

We are honored to welcome Tehran-born, Brooklyn-based artist Morehshin Allahyari to DC for a lecture and performance in conjunction with the exhibition, She Who Sees The Unknown: Aisha Qandisha—a projected digital animation curated by Jonathan Monaghan. Allahyari will talk about her long-term research-based project, She Who Sees The Unknown, and concepts such as monstrosity, re-figuring, colonialism, and Jinn channeling; using the ancient stories of monstrous female and queer Middle-Eastern figures as her point of departure.

She will end the lecture with a participatory performance in which the audience will guide her in revealing a personal story on female desire, hysteria, and sexual harassment. 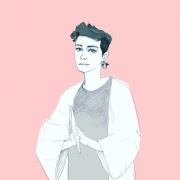 Morehshin Allahyari is an artist, activist, writer, and educator. She was born and raised in Iran and moved to the United States in 2007. Her work deals with the political, social, and cultural contradictions we face every day. She thinks about technology as a philosophical toolset to reflect on objects and as a poetic means to document our personal and collective lives and struggles in the 21st century. Morehshin has been part of numerous exhibitions, festivals, and workshops around the world including Venice Biennale di Archittectura, New Museum, The Whitney Museum of American Art, Pompidou Center, Museum of Contemporary Art in Montreal, Tate Modern, Queens Museum, Pori Museum, Powerhouse Museum, Dallas Museum of Art, and Museum für Angewandte Kunst. She has been an artist in residence at BANFF Centre (2013), Carnegie Mellon University’s STUDIO for Creative Inquiry (2015), Autodesk Pier9 Workshop in San Francisco (2015), the Vilém Flusser Residency Program for Artistic Research in association with Transmediale, Berlin (2016), Eyebeam’s one year Research Residency (2016-2017) in NYC, Pioneer Works (2018), and Harvest Works (2018). Her work has been featured in The New York Times, BBC, Huffington Post, Wired, National Public Radio, Parkett Art Magazine, Frieze, Rhizome, Hyperallergic, and Al Jazeera, among others. Her 3D Additivist Manifesto video is in the collection of San Francisco Museum of Modern Art, and recently she has been awarded major commissions by Rhizome, New Museum, Whitney Museum of American Art, Liverpool Biennale, and FACT to work on developing different components of her current project She Who Sees The Unknown.

In She Who Sees The Unknown: Aisha Qandisha, Allahyari uses 3D modeling, 3D scanning, 3D printing, and storytelling to re-create monstrous female/queer figures of Middle Eastern origin. She mines the traditions and myths associated with these supernatural creatures to explore the catastrophes of colonialism, patriarchy, and environmental degradation in relation to the Middle East, “re-figuring” the past to activate and preserve what may have been forgotten or misrepresented. This project is curated by DC digital artist Jonathan Monaghan, furthering his practice and providing DC with the opportunity to engage with the ideas that Allahyari brings forth.

Gallery hours are Wed–Sat from 2–7pm through March 28

This and other WPA projects are made possible by the DC Commission on the Arts and Humanities, which receives support from the National Endowment for the Arts; The Andy Warhol Foundation for the Visual Arts; Bloomberg Philanthropies; The Morris & Gwendolyn Cafritz Foundation; Hickok Cole Architects; White&Case; and many other generous foundations, corporations, and individuals.