An intimate and candid conversation with performance artists Ayana Evans and Tsedaye Makonnen alongside esteemed conceptual artist and cultural critic, Lorraine O’Grady. Together, they will discuss how their practices engage in self-definition and reflect on how performance can be an act of freedom.

This conversation is a part of our ongoing project Being/Becoming: The Act of Portraiture organized by Yacine Tilala Fall. The exhibition is on view through November 12 and features newly commissioned work by Holly Bass, Renee Cox, Muse Dodd, Dominique Duroseau, and Marcelline Mandeng Nken presented as performance-based, embodied self-portraits. 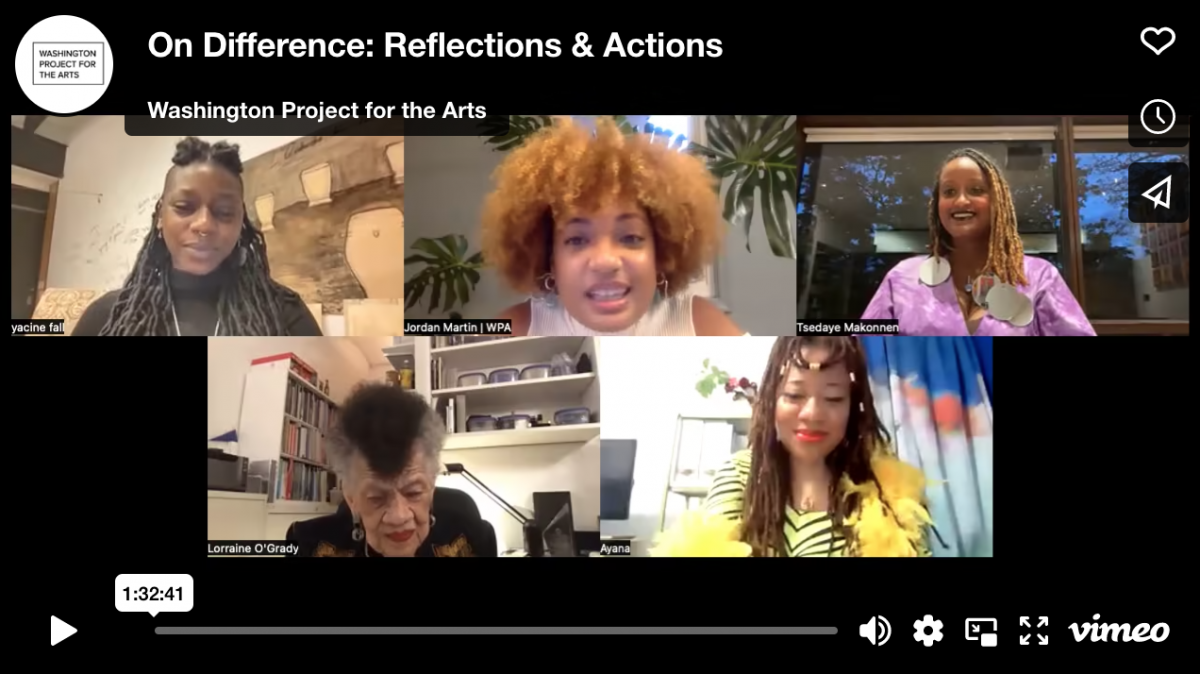 About the Participating Artists 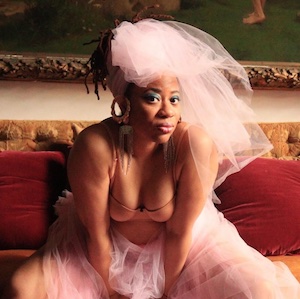 Ayana Evans is a NYC-based performance artist. Her guerilla-style performances have been staged at El Museo del Barrio, The Barnes Foundation, The Bronx Museum, Crystal Bridges, Newark Museum, the Queens Museum, and a variety of public locations. Her performances have been reviewed in The New York Times, Bomb Magazine, ArtNet, Hyperallergic, and New York Magazine’s The Cut. Her international work includes participation in the FIAP performance festival in Martinique, The Pineapple Show at Tiwani Contemporary in London, and Ghana’s Chale Wote Festival, which drew 30,000 people. In 2015, she received the Jerome Foundation’s Theater and Travel Study Grant for artistic research abroad. Evans was a 2018 Fellow in the Studio Immersion Program at EFA’s Robert Blackburn Printmaking Workshop, a 2018 resident and grant recipient at Artists Alliance Inc., a 2017-2018 awardee of the Franklin Furnace Fund for performance art, a 2018 New York Foundation of the Arts Fellow in Interdisciplinary Arts, a 2021-2022 Jerome Hill Artist Fellow, and a 2022 Chamberlain Award winner for social practice and residency at Headlands Center for the Arts. Her other past residencies include Yaddo, Skowhegan School of Painting and Sculpture, and the Vermont Studio Center. Before becoming an adjunct lecturer for graduate studies at Brooklyn College and an undergraduate professor at NYU, Evans was Professor of the Practice at Brown University. 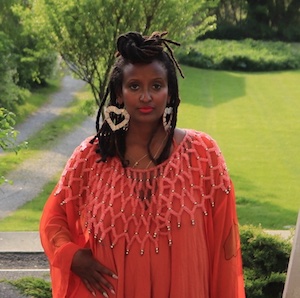 Tsedaye Makonnen is an artist-curator, mother, and birthworker of East African descent. Her studio practice primarily focuses on intersectional feminism, reproductive health, and migration. Her intention is to create a spiritual network around the world that re-calibrates the energy towards something positive and life-affirming. In 2019, Makonnen was a Smithsonian Artist Research Fellow and staged two interventions at the Venice Biennale. In 2021, her light sculptures were acquired by the Smithsonian for their permanent collection and she published the book Black Women as/and the Living Archive. Makonnen is also the recipient of a permanent large-scale public art commission for Providence, Rhode Island. In Fall 2022, she performed at the Venice Biennale for Simone Leigh’s Loophole Retreat. She is the inaugural Clark Art Institute’s Futures Fellow as well as a Franklin Furnace Fund award recipient. In 2023, Tsedaye will be exhibiting at The Metropolitan Museum of Art, Bard Graduate Center, and The Walters Art Museum. She is currently represented by Addis Fine Art. She lives between DC and London with her partner and children. 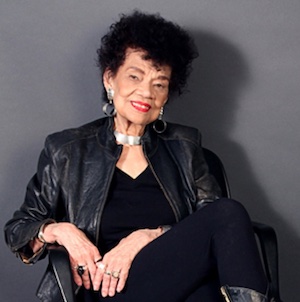 Lorraine O’Grady is a conceptual artist and cultural critic whose work over four decades has employed the diptych, or at least the diptych idea, as its primary form. She has consistently addressed issues of diaspora, hybridity, and black female subjectivity and has emphasized the formative roles these have played in the history of modernism. O’Grady uses the diptych (both/and thinking) to frame her themes as symptoms of a larger problem, that of the divisive and hierarchical either/or categories underpinning Western philosophy. In O’Grady’s works across various genres—including text, photo-installation, video, and performance—multiple emotions and ideas coexist. Personal and aesthetic attitudes often considered contradictory, such as anger and joy, or classicism and surrealism, are not distinguished. Even technical means seem governed by both chance and obsessive control so as to express political argument and unapologetic beauty simultaneously. And across the whole, essays and images interpenetrate. While O’Grady’s diptychs are sometimes explicit, with two images side by side, at other times they are implicit, as when two types of hair—silk and tumbleweed, videotaped on the same scalp at different hours of the same day—alternate and interact to create permeating worlds. The goal of her diptychs is not to bring about a mythic “reconciliation of opposites,” but rather to enable or even force a conversation between dissimilars long enough to induce familiarity. For O’Grady, the diptych helps to image the kind of “both/and” or “miscegenated” thinking that may be needed to counter and destabilize the West’s either/or binary of “winners or losers,” one that is continuously birthing supremacies, from the intimate to the political, of which white supremacy may be only the most all-inclusive.

O’Grady’s paper archive is in the collection of the Wellesley College Library. Among O’Grady’s writings, the 1992/94 long-form essay “Olympia’s Maid: Reclaiming Black Female Subjectivity” has proved an enduring contribution to the fields of art history and intersectional feminism that is now considered canonical. O’Grady’s art works have been acquired by the Art Institute of Chicago, Museum of Modern Art, Tate Modern, Museum of Fine Arts, Boston, and the Whitney Museum of American Art.