A Conversation with Angel Abreu of Studio K.O.S. 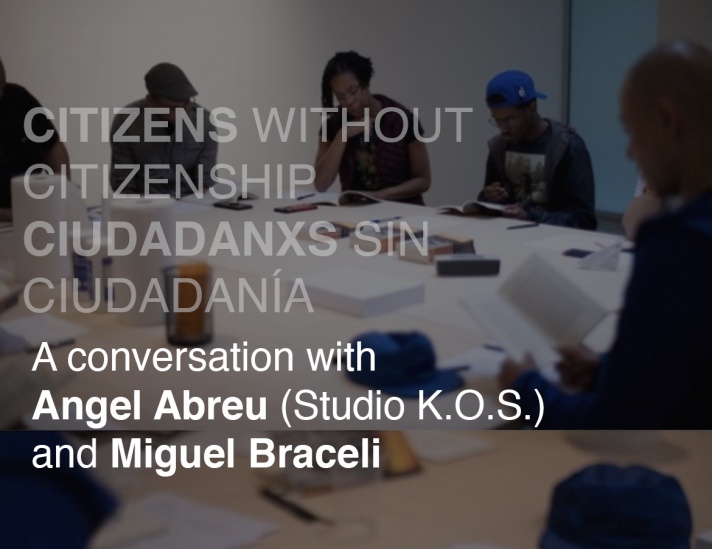 Join us for a conversation with Angel Abreu of Studio K.O.S. and artist-organizer Miguel Braceli. The two artists discuss their immigration and citizenship experiences, cultural assimilation, and how they fold educational methodologies into their art practices. The event took place virtually over Zoom on Thursday, October 28 from 7:30–8:30 pm EDT. Watch the recording here.

This discussion publicly launched Citizens without citizenship | Ciudadanxs sin ciudadanía, a multi-part research project organized by Venezuelan-born artist Miguel Braceli around the questions: What does it mean to belong to a city? How do different cultural notions of citizenship affect our experience of cities, and how does government policy determine who can make them their home?

For the next several months, Braceli is exploring these questions with prominent artists—including Angel Abreu from Studio K.O.S. and Tania Bruguera—and members of the DC-area community. 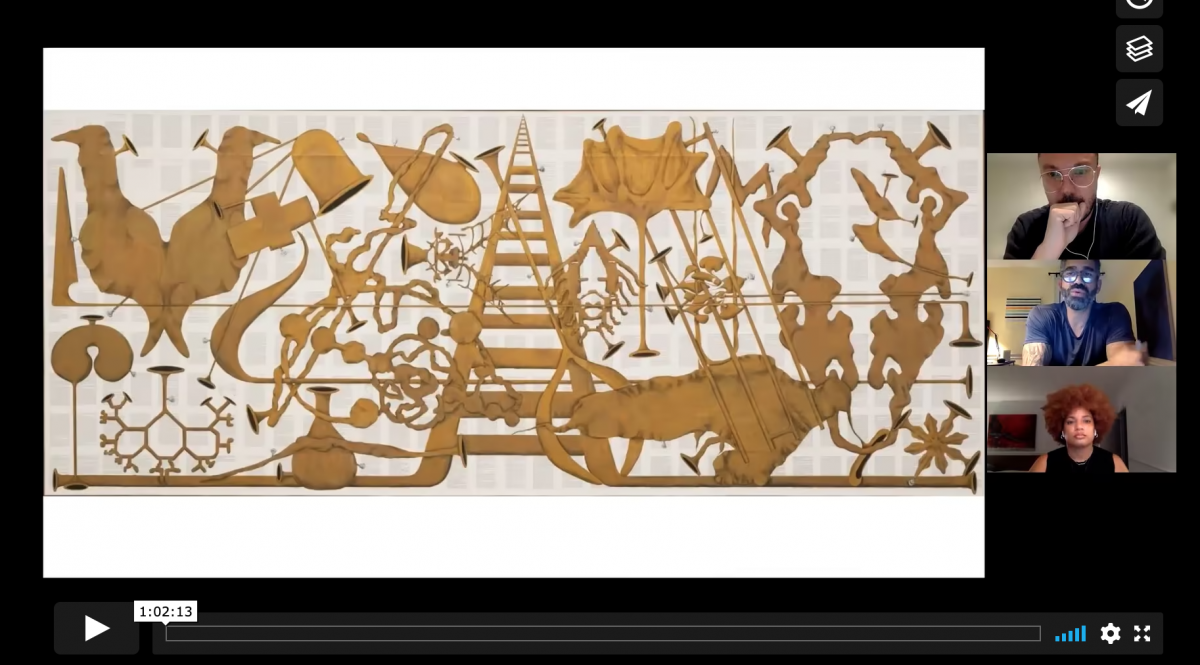 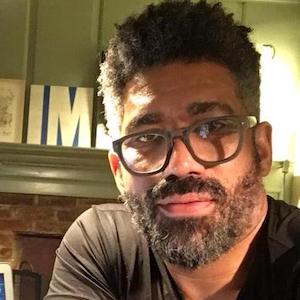 Angel Abreu is an artist, writer, and educator. Abreu joined Tim Rollins and Kids of Survival (K.O.S.), an artist collaborative originating in the South Bronx in 1986. Their work, which is based on canonical literature as well as music, resides in over 120 permanent museum collections around the world including the Museum of Modern Art (MoMA), Philadelphia Museum of Art, and Tate Modern. Through his collaboration with K.O.S., Abreu was the youngest, at 14, to have a work acquired by and be listed on the artists’ roster of MoMA in New York City.

Abreu continues his work with K.O.S. despite the sudden death of its founder, Tim Rollins, in 2017. The project has since reinvented itself and become Studio K.O.S. under Abreu's leadership. In 2019, Studio K.O.S. had its first commercial exhibition since Rollins' passing at Lehmann Maupin Gallery in NYC. They have continued to conduct socially engaged workshops with youth and educators around the United States and internationally. Since its reinvention, Studio K.O.S. has been written about in The New York Times, Forbes Magazine, and The Philadelphia Inquirer. Recent projects of theirs have been presented at the Walker Art Center, MoMA, Art Resources Transfer, and the National Academy of Sciences.

In addition to Abreu’s work with Studio K.O.S., he continues his own painting practice based on a study of literature, philosophy, music, and social practice. His individual work was included in the recent exhibition titled Embodied Abstraction at Wexler Gallery in Philadelphia. Abreu is on faculty in both the BFA Fine Arts and MFA Art Practice departments of the School of Visual Arts in New York City. He also serves on the Education Committee of The Bronx Museum of the Arts in The Bronx, NY.

Miguel Braceli  is a multidisciplinary artist working at the intersection of art, architecture, and education. His practice is focused on participatory projects in public space. Most of these projects have been large-scale, developed in countries such as Argentina, Bolivia, Chile, Costa Rica, México, Spain, Sweden, United States, and Venezuela. They explore notions of borders, migrations, national identities, and social-political conflicts, working from the geopolitical geography to a human scale. Museums and art spaces that have presented Braceli’s collective performances include Matadero Madrid, LABoral Centro de Arte y Creación Industrial (Asturias), and the University Museum of Contemporary Art (Mexico City).

Braceli has been an artist-in-residence at Art Omi (New York), McColl Center for Art (Charlotte), MASS MoCA (Massachusetts), and Kiosko (Bolivia). His most recent recognitions include being a Sondheim Prize Finalist (2020), Future Architecture Fellow (2019), and Leslie King Hammond Fellowship Award MICA (2018). Braceli is a Associate Professor in the Faculty of Architecture at the Central University of Venezuela, and has led various participatory and educational projects with institutions such as the Museum of Modern Art (New York), the Museum of Fine Arts of Caracas, the Embassy of United States, and the Embassy of Spain in Venezuela. He is currently a Fulbright Scholar working and living in the United States.

About our Program Model

We designed our artist-driven programming model because we recognize that artists are increasingly collaborating across boundaries and borders to build community and shape discourse. We are interested in facilitating these collaborations through artist-driven inquiry. Our program model provides artists with the opportunity to expand their practices and experiment without absorbing financial burdens or capacity barriers. We provide resources to create critical connections and long-lasting, mutually beneficial relationships that build artistic communities around knowledge-sharing.