Tsedaye Makonnen is an Ethiopian-American interdisciplinary artist, a mother and a former doula. Recurring themes present in her work are identity, colorism, womanhood, ritual and kinship. She's particularly drawn to conveying the African Diaspora's creative responses to assimilating, destroying and recreating the Self within new and/or hostile territories, whether that happens to be a new country or a hospital room. As of late, she has been connecting the forced migrations taking place in DC and abroad through performance art and installations.

Tsedaye has performed in D.C. at the Corcoran Gallery, Smithsonian National Portrait Gallery and Smithsonian National Museum of African Art. She's a part of NY's performance art scene and has shown at Five Myles Gallery, El Museo del Barrio, Grace Exhibition Space, Panoply Performance Lab, ABCNoRio, and more. She has an upcoming performance at Pratt Film Institute, a part of Myrtle Avenue's Black Art Story. She is also involved in a touring performance art collective titled BlackGirlLit. A screening of#BlackGirlLit: Between Literature, Performance & Memory will take place at MoCADA during 3DotZine's fest. She currently has two collaborative video performances up at MOAD in San Francisco a part of Helina Metafaria's solo exhibition Home//Free. And another video performance installation at Joan Hisaoka Healing Arts Gallery titled Holy Water: Bleach Bloodbath series, a part of the Us Vs. Them group exhibition.

During her Artist-In-Residence at 39th Street Gallery in Brentwood, Md, Tsedaye created a participatory performance series that took place in DC for What’s Going On Shaw. She presented a series of performance art incorporating traditions from her Ethiopian-American background within the current microcultures of Shaw, where she was born. In blending the rituals of Ethiopian coffee ceremonies with the culture of today’s grab & go coffee, Tsedaye and a group of participants from the community performed a coffee ceremony with a twist that nods to the changing landscape of Shaw. She activated the space in front of local Shaw businesses and streets; including well-known Zenebach Restaurant and Creative Time's DC Summit. As well as engaged in bridging the gap between the microcultures by helping form new bonds and tighten existing ones. This piece of work was titled ‘Common Ground’ in which the children of Shaw Community Center, where she teaches visual art and social practice, assisted her in making 100 ceramic coffee cups to use during the performance. In this piece, she wanted to reflect the history, leaders and present day situation of this historical district. Here is some press on the 'Common Ground' piece: http://thekojonnamdishow.org/2016/10/05/ethiopian-coffee-ceremony-sparked-conversation-changes-shaw 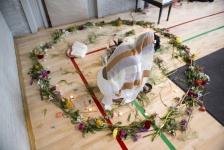