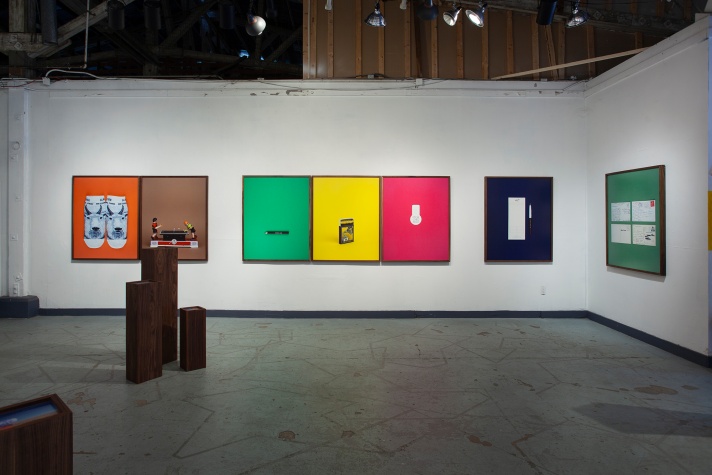 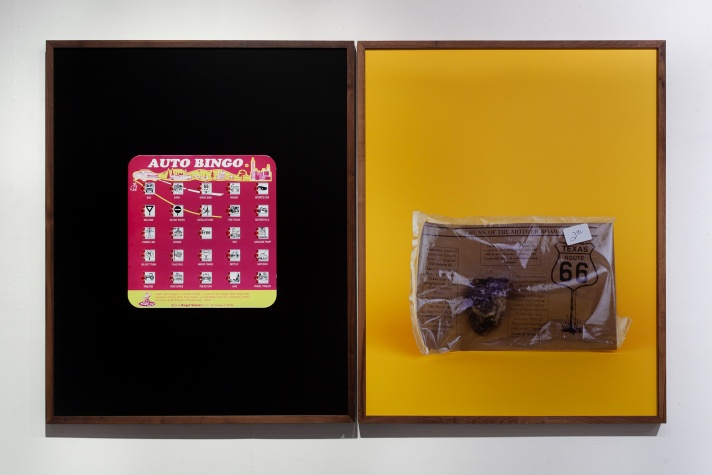 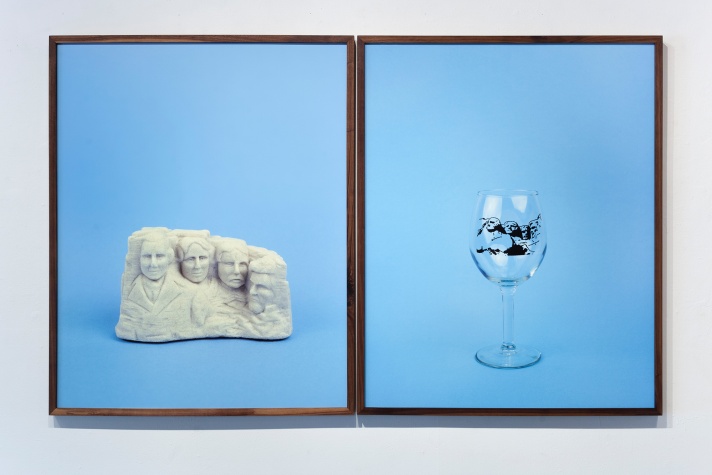 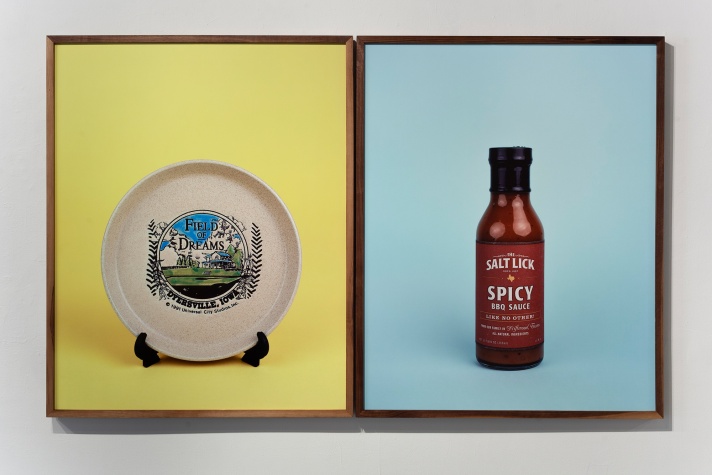 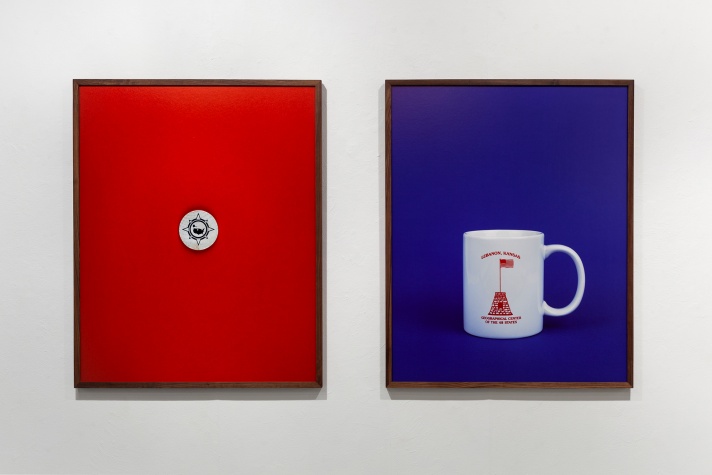 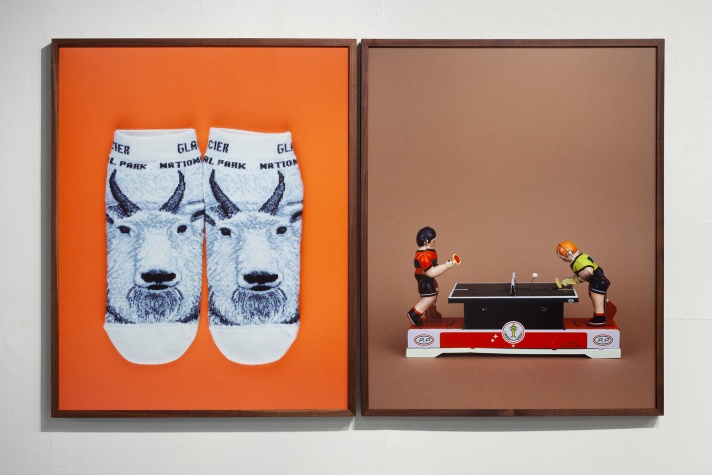 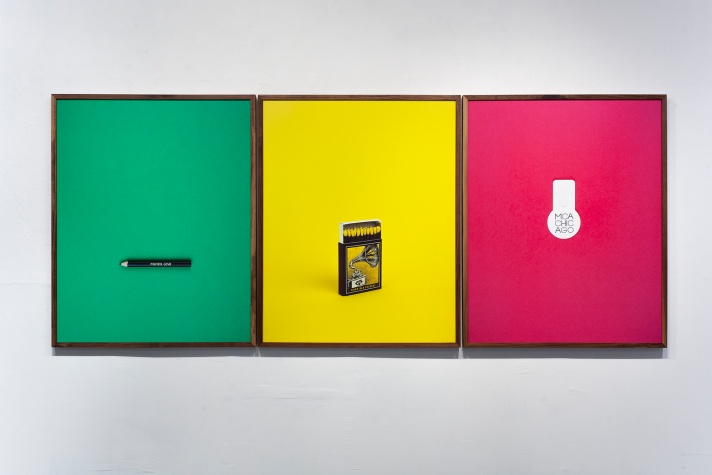 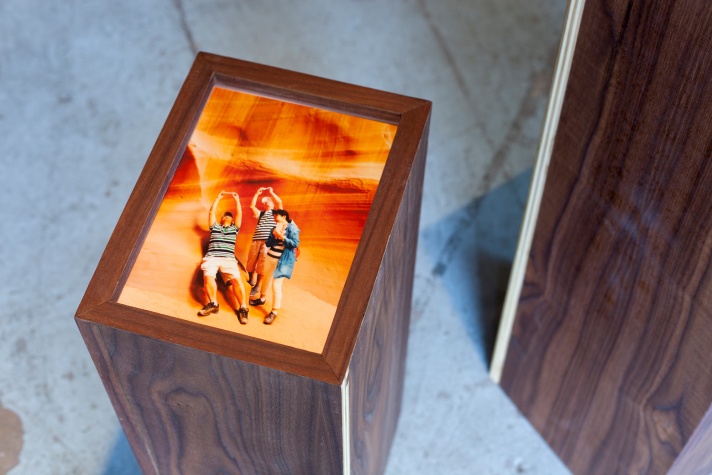 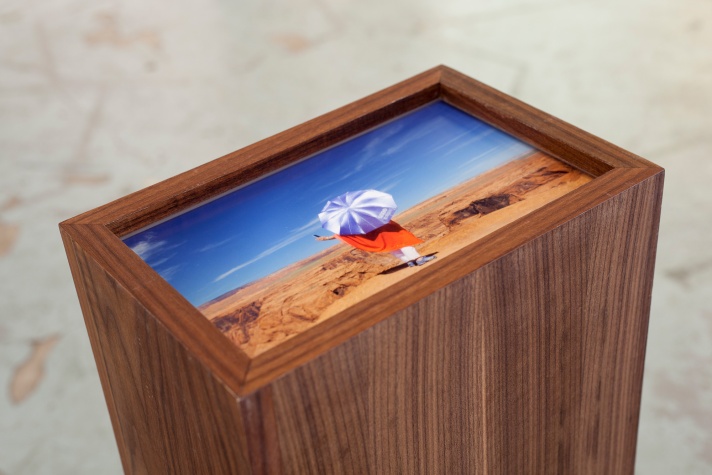 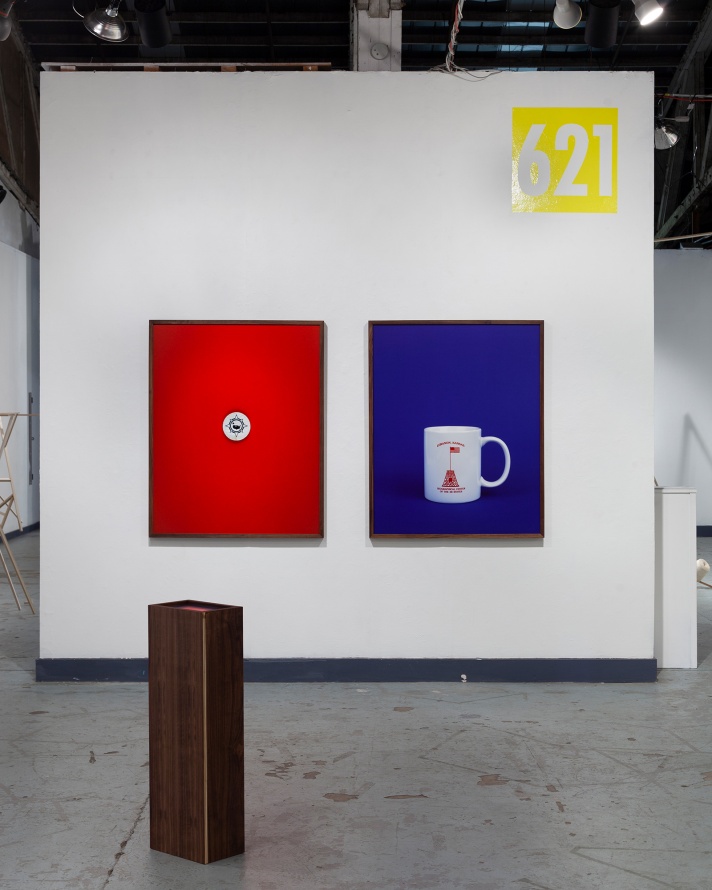 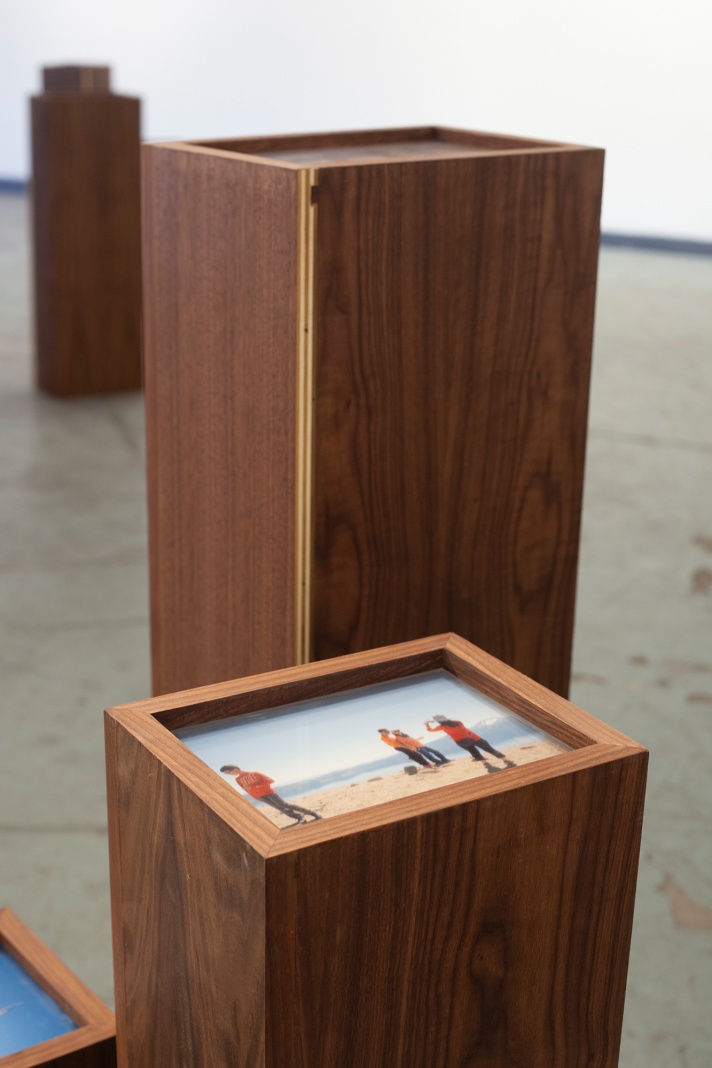 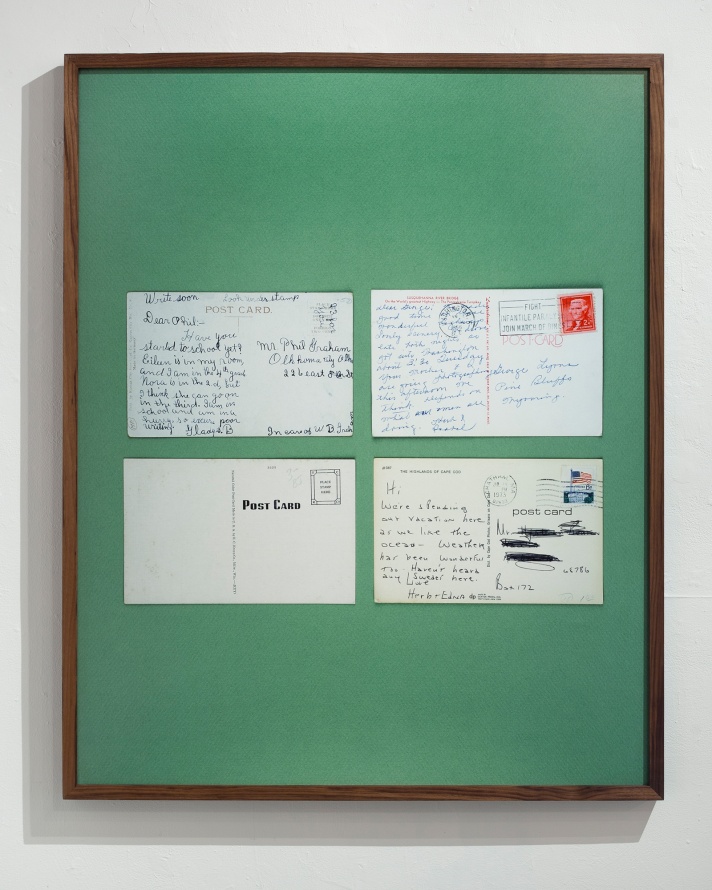 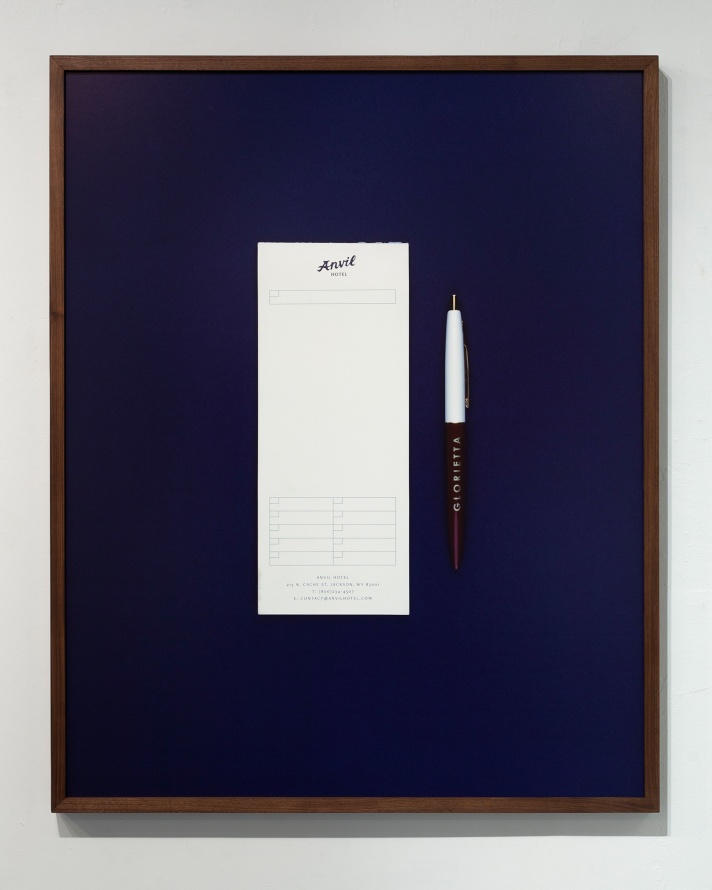 American Miniaturereveals an affinity for the kitsch that comes along with exploring roadside America. Collected on numerous cross-country road trips, through a cumulative total of 47 states, our souvenirs from various sites are presented against brightly colored backdrops.

Souvenirs present a strange dichotomy - they are inherently and inextricably linked to a place, but their value relies on them becoming divorced from that place and re-contextualized in an entirely new one. Ultimately, they live together on a shelf, comprising an oddball portrait of one’s travels. The site from which the object is derived becomes secondary, an abstract backdrop that enhances or rounds out the memory.

As a means of highlighting this displacement, each souvenir is photographed against a solid-colored background that vaguely recalls its original context. A commemorative plate from the Field of Dreams movie site sits against a field of corn-yellow; a red & white mug from the Geographic Center of the U.S.A. receives its missing blue.

Employing the visual language of product photography, our large format images again re-contextualize these mass-produced knick-knacks, removing them from their place on the shelf and inverting their status as something cheap and memorial into something grand and aspirational – oversized, self-reliant monuments to travel and tourism.

These larger-than-life souvenir portraits are paired with smaller snapshots of tourists that we encountered along the road. In each snapshot, someone either poses for or captures a photograph. The tourists punctuate and often obscure the views of the pristine landscapes they are photographing, highlighting how awkwardly we tend to interact with an environment when it’s one we’re unfamiliar with.

The snapshots are converted into large, three-dimensional objects and arranged on the gallery floor, transforming anonymous tourists’ passing moments into an arrangement of souvenirs. The large size of these new souvenirs compels viewers to move their bodies as they interact with them – crouching, standing on tip-toes, or tilting their heads as if peering at their phones. The tourists posing in the images appear oblivious to their surroundings, while the gallery viewer navigating around these objects is made acutely aware of theirs.

In both the souvenir portraits and the tourist snapshots, the original locations are secondary, serving as either abstract or obstructed backgrounds against which the important acts of commerce and image-taking occur.